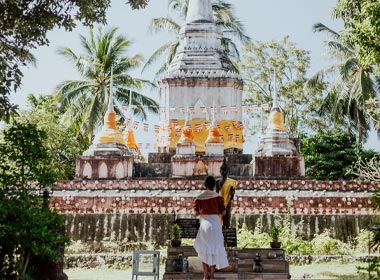 Greng jai is an important part of thai culture

Society as a whole has adapted into thinking collectively. In Thailand, collectivism goes beyond observable actions; it extends to interpersonal relationships and notions of how you are perceived.

This concept is called Grenga-Jai, and it is inherent to Thai family culture. The term refers to an attitude of aiming to please people by not imposing yourself onto others.

A more familiar concept is that of a people pleaser, the only difference between pleasing people and Greng-Jai is the intent. A people pleaser aims to be accepted and well liked, while Greng-Jai puts others before themselves out of consideration.

Greng-Jai is an important part of Thai culture, perhaps even a national culture. Being over assertive, they believe, can be destructive in the long run. They believe that there is more benefit to being obedient and amiable.

Imagine yourself in this situation. A colleague of yours notices that a report that your boss is expecting has not yet been submitted, leading him to visit your cubicle. Instead of berating you, he asks, with utmost sincerity, if you are having any difficulties with the report and even offers his help.

How would you feel if you were to accept his help? If it were up to Thai people, they’d vehemently deny the offer. This would not only inconvenience your colleague, but you’d lose your face in the process.

The Concept of Losing Face

Losing face in Thailand is a severe form of social disgrace. This doesn’t exactly pertain to your physical features. Rather, this stems from the concept of “Face”, wherein a person feels that his/her dignity is dependent on how other people see them. You must be prepared to make sacrifices if you want to keep other people’s respect.

Troubling someone with a favor in Thailand doesn’t necessarily mean you immediately lose your dignity and become a social pariah. But as much as possible, they’d like to avoid doing it lest they’d develop a habit of relying on others.

Think of it as though you are accumulating points in a rewards program. If you forget to bring your reward card, you lose your chance to gain points. But that doesn’t mean you lose all of them. On the other hand, spending your rewards carelessly can leave you with nothing.

It’s not an issue to ask for help when you are in dire need. If you do it too much, it will raise some eyebrows.

Seeing a couple argue or kiss may be a common sight in public places to some. But in Thailand, publicly displaying affection, getting into an argument, or making a scene is an absolute taboo.

They believe these things are to be done privately, most preferably within the walls of your own home. By exhibiting strong emotions in public, you are basically exposing yourself, baring yourself nude in public. It is as shameful as it is bothersome to others.

To Thai people, there is power in passiveness. Being too adamant in your beliefs can deter other people from approaching you. This is where the importance of national culture comes into play. By observing self restraint, Greng-Jai discourages prioritizing one’s self and keeps your self esteem and ego in check.

Thai people are humble enough to acknowledge when someone is better than them. They are eager to jump at the opportunity to improve. Education is largely seen as a way of moving up the hierarchy rather than as a thirst for knowledge.

“Giving in first for later victory is a sign of inner strength, courage, and wisdom because power comes through weakness.”

Greng-Jai pacifies any potential conflict that may arise. Although Thai people are prepared to obey others unquestioningly, they’d rather come to a “middle ground”.

Thailand looks more towards reconciliation and bonding after a dispute or disagreement. Their attitude of avoiding quarrels and seeking compromise can often lead to disastrous ends.

This introduces us to the downsides that come along with Greng-Jai.

For one, it develops a habit of overlooking into other’s mistakes. These mistakes can come at the expense of other people and can critically impact those belonging in the lower social class. Confrontation is no good and will only make matters worse, which leaves them no choice but to suffer in silence.

Another thing to note is the abuse of their kindness. These genuine acts are taken for granted and even exploited, particularly among tourists. Some of them are well aware of how Thai people provide alms to people in the temple, and they take advantage of it.

There is of course a tough penal system. But Thai instinct is in theory one of repentance and forgiveness rather than punishment, so there are instances where they get away scot-free.

Thai people use Greng-jai to justify life crises. When a terrible fate befalls on a Thai, it is usually put down to that person’s karma. This immediately causes a shift from “Greng-jai” to a people pleasing mentality. In order to regain their dignity, they attempt to win people over with favors. This is no longer considered saving face, but a desperate attempt to regain respect for your benefit. Basically defeating the very reason Greng-jai came to be.

Influence of Religion in Thai Culture

Social classes play an important part in Thai culture. Your role in society dictates how you are to be treated. Buddhists, in particular, are given the second highest regards. The first place goes to none other than The Buddha.

Buddhism is considered a philosophy for how to live one’s life. Numerous Buddhist principles — such as tolerance, calmness and merit — are values found throughout Thai family culture. These religious and cultural influences are what makes the “Greng-Jai” the stabilizing factor of Thai society. Most importantly, it also helps building character.

Like a few other Buddhists, Thai people also believe in karma. They strongly hold onto the belief that they are to merit blessings tenfold than what they had initially given. Making merit means to give back to your community and accrue good karma as an effect.

Understanding the concept of Greng-Jai is vital in understanding Thai people as a whole. Prioritizing others does not have much of an impact on their pride. Their pride as a person stems from the need to become a better person and not the need to satisfy their vanity.