Newest, beautiful, single women now added for week of Wednesday, 21 September, 2022 - Tuesday, 27 September, 2022
Your opportunities here are truly worldwide. Explore our site deeply to see how you can realize that! 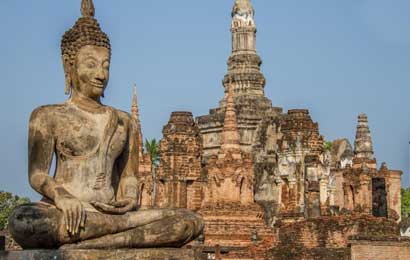 Discover more of the history of Thailand through our singles' tours!

The Kingdom of Thailand is located at the center of Southeast Asia. It is widely-known for its grandeur architecture and colors. Because of this, the country stands out along with many other countries in continental Asia. Built by distinct pillars, the history of Thailand will undoubtedly leave us in awe.

From elegant old Siam to the bustling yet easy-going Thailand of today, this peace-loving country has come through a tumultuous and fascinating history that has given color to the culture and tradition of the kingdom.

The kingdom of Thailand that we know of today did not exist until the early 1900s. In the history of Thailand, various empires struggled against each other vying for power across the land and creating a rich and fascinating historical saga.

Centuries before a united country was established, the area was a formation of several different empires. The first Thai kingdom was Sukhothai which roughy translates to “dawn of happiness,” established in 1238 by two Thai chiefs, Khun Pha Muang and Khun Bang Klang. The Thais prospered, religion and culture flourished.

When King Khun Pha Muang died in 1279, King Ramkhamhaeng ascended to the throne and developed the first Thai script. This era was considered as the most prosperous period in the country for it has a lot of significance in Thailand’s history. However, the kingdom was short-lived as it was assimilated by a young and dynamic kingdom in the Chao Phraya River valley, the Ayutthaya Kingdom.

The kingdom of Ayutthaya, whose name was derived from Ayodhya which is an Indian holy city, absorbed Sukhothai in 1376, expanding and consolidating Thai sovereignty and nationhood. Its location in the Mae-nam or Chan Phraya valley allowed the kingdom to expand rapidly as it traded with neighboring states.

Europeans were visiting the royal court in the early 16th century, and many called it ‘Asia's most magnificent city'.This period is known as the "golden age of Thai literature" and the "golden age of medicine in Thailand" due to the progress of medicine at that time. It was also in this era that the kingdom was known to be the Kingdom Of Siam by the Europeans.

The Ayutthaya Kingdom was weakened by fighting and eventually toppled by the Burmese invasion. This began a brief period of foreign rule. The capital city Ayutthaya, which had been one of the largest and most powerful trading centers in the world, was destroyed. However, the strength and solidarity among the Thai people of the region ran deep, and it was only a few decades before popular uprisings restored Thai rule under the Rattanakosin Kingdom.

The Rattanakosin Kingdom, ruled by the Chakri Dynasty, held power from 1782 to 1932. They are responsible for moving the capital to its present location, Bangkok. They were also the architects of numerous economic and technological modernizations that were critical in making the Land of Siam a modern nation.

The Rattanakosin Kingdom existed at a time when European colonialism was rampant in Southeast Asia. Through careful negotiations and treaties, the Chakri kings skillfully navigated the world of global politics.

Although, they had to sacrifice some of their territory to the north and east, the Kingdom of Siam was the only Southeast Asian nation not to fall to European colonialism. A series of treaties with Britain and France in the early 1900s defined the borders with Malaysia in the south, and Cambodia and Laos in the northeast.

With the early history of Thailand, it is no wonder how the Thai tourism attracts historians around the globe. With all that the kingdom of Thailand has gone through in the course of its early history, it has become economically and politically stable over the years and is now, in fact, considered one of the fast-developing countries in the world.

The country suffered several power struggles and coup d'etat before it was established as it is now. With all the warring kingdoms that struggled to rule the old Siam and the political chaos the country had experienced, it was finally named “Thailand” which means the “Land of the Free” in the year 1939, before coming to be known as Siam once more between 1946 and 1948. Finally, in 1948, the name was reverted back to Thailand again, officially as “The Kingdom of Thailand,” which continues to be recognized around the world.

One of the reasons why the country continues to blossom is because of its tourism. With the continuous increase of the number of tourist and foreign visitors that Thailand has each year, it is now considered as a jewel of the Southeast Asian region; this gives way to the rise of hundreds of tour packages to the country with the promise of enjoying the country’s aesthetics and adventures.

Given its rich history, colorful culture and traditions, grand palaces and temples, paradise-perfect beaches, wide array of biodiversity and not to mention the warm smiles of its gorgeous single Thai girls, Thailand is indeed a destination not to be missed.

Discover more about Thailand and experience for yourself this historical country in order to know its true beauty. Join us now!

Newest, beautiful, single women now added for week of Wednesday, 21 September, 2022 - Tuesday, 27 September, 2022
You have to meet the women to marry them! What other international dating site offers you numerous opportunities to do that?