Newest, beautiful, single women now added for week of Wednesday, 1 February, 2023 - Tuesday, 7 February, 2023
Your opportunities here are truly worldwide. Explore our site deeply to see how you can realize that!

The Thai Culture and Customs 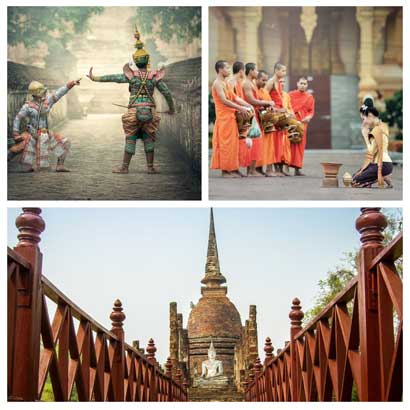 Discover the fun and enjoyment of the profound Thai culture and traditions.

Formerly called as "Siam", Thailand holds a legacy of kingdoms which contributed a lot to the nation’s culture. Although this mixture of tradition varies widely from the very beginning of the Ayutthaya era until today, it is truly evident that it greatly helped the country to be the nation it is at present. Aside from the ruling side of Thailand, its religion also played an important role in contributing to the spiritual and emotional attributes of many Thai people.

To give you a full understanding of the customs and traditions of Thailand, here are some examples you need to know:

The head is high and the feet are low, both physically and spiritually. Never touch anyone’s head, and avoid unnecessary gestures (especially toward a Buddha image), moving things and touching people with your feet, even if you see some people doing it to their friends. Before entering a temple or a person’s home, remove your shoes.

Dressing for the Occasion

Cleanliness and neatness are also important. In tropical Thailand, never put off showering or doing your laundry. Most Thais keep themselves scrupulously clean and dress respectably, which we can usually observe in Thai women. T-shirts, sandals and knee-length shorts are suitable for informal occasions, but visits to palaces, government offices and some temples usually require something more appropriate. Nudity is forbidden, and topless bathing can offend, even though these are tolerated in some tourist beaches.

Putting On A Smile

In Thailand, almost everything in life involves a smile, even blunders and mishaps. Westerners often mistake this for being laughed at. For example, if a waitress forgets an order and laughs, she is not showing contempt--- she is just making the best out of a bad situation. If you complain, do so gracefully as anger usually gets you nowhere. This Thai culture may be one of the reasons why Thailand is dubbed as the "Land of Smiles".

Shared meals are served in separate dishes with serving spoons. If someone invites you to eat, use the serving spoons to put food on your plate, not your personal spoon. Take small amounts of all the food instead of keeping one kind for yourself. Using a toothpick after the meal is acceptable if you cover your mouth with one hand.

The wai is the common form of greeting and adheres to strict rules of protocol. Raising both hands, palms joined with the fingers pointing upwards as if in prayer, lightly touching the body somewhere between the chest and the forehead, is the standard form.

This culture of Thailand is both a sign of respect as well as a greeting. Respect and courtesy are demonstrated by the height at which the hands are held and how low the head bows down to meet the thumbs of both hands. The wai may be made while sitting, walking or standing.

Thailand is a stronghold of Buddhism. Buddhists believe that life does not begin with birth and end with death, but that every person has several lives based upon the lessons of life not yet learned and acts committed (karma) in previous lives.

Buddhists believe that selfishness and craving result in suffering and that compassion and love bring happiness and well-being. The true path to peace is to eliminate all desire, a condition which Buddhists define as 'nirvana', an indescribable state free of desire, suffering, or further rebirth; it is when a person is completely at one with his surroundings. Buddhism is practiced in Thailand by over 90% of the population.

The family is the cornerstone of Thai society, and also stands for the marriage culture of any home in Thailand. Family life is often more closely knit than in western cultures. The Thai family is a form of hierarchy with the parents at the top. Children are taught to honor their parents.

The wai (as mentioned above) is the traditional form of greeting, given by the person of lower status to the person of higher status.

Thais generally use first names rather than surnames, with the honorific title Khun before the name. Khun is an all-purpose form of address that is appropriate for both men and women. In general, wait for your host and hostess to introduce you to the other guests. This allows everyone to understand your status relative to their own, and thus know who performs the wai and how low the head should be bowed.

If you are invited to a Thai's house, arrive close to the appointed time, although being a few minutes late will not cause offense. Check to see if the host is wearing shoes. If not, remove yours before entering the house.

Ask another guest to confirm the dress code. Step over the threshold rather than on it. This is an old custom that may be dying out with younger Thais, but erring on the side of conservatism is always a good idea.

A fork and spoon are the usual eating utensils. However, noodles are often eaten with chopsticks. The spoon is held on the right hand and the fork on the left. The fork is used to guide food on to the spoon. Sticky rice, a northern Thai delicacy, is often eaten using the fingers of the right hand.

Most meals are served as buffets or with serving platters in the center of the family table- style. You may begin eating as soon as you are served. 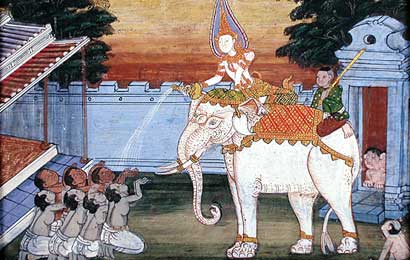 Ever since before, Thai’s art has been known to be classic and elegant.

Thailand's many classical art forms, famous for their elegance and gentility, have their roots firmly planted in Buddhist traditions. To give an insight on those, here are the forms of art in Thailand:

Buddhism is prominent in Thai literature, and the teachings of Buddha, revered monks and Buddhist scholars are available everywhere. However, the most influential piece of classical literature is probably the Ramakien, based on the ancient Hindu epic Ramayana, the story of Prince Rama’s search for his kidnapped Princess Sita. The Thais have adapted and stylized it into their own longer version.

One of Thailand’s stunning theater productions is Khon, a traditional drama with masked human, monkey and demon characters recreating scenes from the Ramakien. More popular locally is Li-Kay, featuring extravagantly dressed players bounding through sets of melodrama and loony humor to a lively mix of classical and folk music. In the south, shadow puppet theaters are also popular. The cowhide puppets represent an art brought to the Malay peninsula by Muslim traders around 500 years ago.

Pop, rock and disco music are as pervasive in Thailand as they are anywhere, but many forms of traditional music are still popular. From grinding woodwinds resonating at Thai boxing matches to the soothing string instruments accompanying diners at upscale restaurants, traditional Thai music matches all moods. Classical Thai orchestras comprising up to twenty musicians play countrywide at festivals and fairs.

Art thrives in the kingdom, but what strikes a visitor most is the sheer beauty and elegance of traditional Thai architecture, particularly that of temples and other religious structures. Buddhism has an immense influence over classical sculpture and painting, but modern art is also well-established.

Festivals symbolize the beliefs and principles of a certain place. For this Southeast Asian nation, you will know that the religion and history of Thailand portray much of its annual festivals. Here, you will also get to understand all about Thailand’s culture. To give you an idea of how those festivals are done, we listed some for your convenience.

The traditional Thai New Year usually falls around the 13-17th. Local people are to pay homage to Buddha images, clean their homes, and sprinkle water on their elders to show of respect. This has developed in recent years into open water warfare, with everything from hoses to ten gallon tubs used to guarantee a thorough soaking of the target.

This is particularly popular in the tourist areas of Khao San Road, Bangkok, and Chiang Mai. The latter also holds colorful parades and religious ceremonies. This is one of the best festivals that give importance to the traditions in Thailand.

Villagers from the poor northeastern province of Yasothon compete with each other to make the biggest, most explosive bamboo rockets during this annual rainmaking festival. Prizes are awarded for the rocket that reaches the highest trajectory.

This ten-day Chinese festival in Phuket has become world-famous for the gory pictures of people impaling their faces and bodies with everything from swords, spears and even fish. Apparently unable to feel pain and in a trance-like state, these people of Chinese ancestry parade in the streets with the various arrays of sharp objects still protruding from their flesh. A little less gory are the beauty pageants, fairs and food stalls that line the streets of Phuket town.

River spirits are placated for another year with gifts of Krathongs floated on rivers, canals and lakes on the night of the full moon. Made of banana leaves, and decorated with incense and candles, thousands of these beautiful boats light up the night. The most beautiful sights are at the Bang Sai Arts & Crafts Centre near Ayutthaya, and in the ruins of Sukhothai, the first Thai capital, where the festival is supposed to have originated.

Join our by registering with us for FREE, and get to experience and learn more about its culture and traditions!

Newest, beautiful, single women now added for week of Wednesday, 1 February, 2023 - Tuesday, 7 February, 2023
You have to meet the women to marry them! What other international dating site offers you numerous opportunities to do that?