Everything You NEED to KNOW About Thai Culture 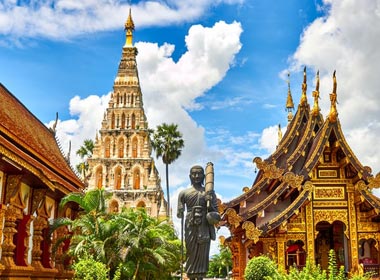 Date ready with Thai women and start by learning all about the Thai culture.

Are you a person who appreciates gentle and elegant ladies? Do you prefer well-behaved women over someone totally outgoing? Do you simply admire Thai women? If so, what do you know about Thai culture?

Thailand is a beautiful country situated in the Southeast Asian region. As it is the only country in Southeast Asia to not be colonized by a European country, rich history is what it has. This land of smiles has become one of the top tourist destinations in Asia and has continued to amuse people more and more.

With its climate and its location, it houses wonderful tropical beaches you can enjoy almost any time of the year. Other than this, it is also home to iconic and magnificent temples such as Wat Arun, Wat Pho and the Wat Phra Kaew.

Its capital city Bangkok is a vast city that is primarily known for its vibrant street life, lavish shrines, and neighborly food stalls. If you are someone dating a Thai woman, know these first before settling into a deeper relationship:

1. Love and loyalty to the home country

One of the most well-established Thailand values you have to know is the patriotism that Thai people have for their country Thailand. People are very much proud of their origin and honor their country by playing the national anthem at most twice a day and people always stop and stand until the hymn ends.

The national flag is also seen erect in a lot of places here and there and is raised when the national anthem plays in the morning and is lowered at night time. You may not be used to something like this as to how they are, simply respect this trait of theirs whenever you are in Thailand with your Thai woman.

Theravada Buddhism is the country’s predominant religion and is believed by almost all of the Thai people. It is unique in comparison to other Buddhist nations and it has been largely influenced by both Hindu and Chinese practices and beliefs.

If you walk around Thailand, you will find how people wear huge amounts of amulets, talismans, and other tangible objects that relate to what they believe. As much as you will see Thailand flags all around, the same goes with the shrines that cover almost all places as well.

Going around, you will be amused at how there are seats in public transport simply dedicated to them. You are to act well if a monk is around, and females even have to be more cautious, too. You are not to hand anything to a monk by holding it in your hands, but have to do so by placing an item on their dish.

If this is something absolutely new to you, try to be a bigger person by showing respect for what the Thais live by.

The country is thought to be a land of superstitions and the beliefs of Thailand are something that you would find interesting.

A large number of people in the country believe and hold on to the abilities and skills of the monks and fortune tellers around.

As not all countries, let alone people, strongly believe in superstitions, try your best to not show in any direct way that you happen to not be on the same page as this is something that is totally rude to show to them.

5. Importance and impact of status

Social status brings a large impact to the Thais. Depending on the profession you have or simply the way you earn, your financial condition, and even with your civil status, all of this can affect how you are addressed and expected to act around people.

Thailand also has the so-called ‘wai’ which is done in different manners depending on a person’s status. The wai is the act of showing honor and respect to someone by placing their palms together and bowing their head.

Addressing someone is also done by using ‘pee’ and ‘nong’ which both denotes a different status and age.

Unlike In comparison to many western countries, people in Asia have closer family ties. They are known to be very involved even with their extended family members.

Growth is also not something that separates you from the family if you are in Thailand, and men and women alike almost put family first just about almost anything.

If you are dating a woman from Thailand, embrace this part of culture and give your utmost respect. Earn the family’s trust if you wish to settle down with your Thai woman. Be true about your intentions as early as possible, be it courtship or dating stage.

Socializing with people over will always involve talking and body touching. When you are in Thailand, you will find how they are different in this part.

The head is considered to be the most spiritual part of the body and it is particularly a big no to go around comfortably touching other people’s heads. Even if it is a child, you still have to refrain from doing so.

In Thailand, a yes can mean a lot of things. As people are polite enough and prefer to save face, their ‘yes’ may not always seem like one. Moreover, if a person directly says no, then no doubt it is. As for a ‘yes’, then better ponder on it first.

Thai culture is rich and carefully embedded in the Thai people themselves. As it is passed on from generation to generation, it continues to grow and has not been forgotten in any way since.

For someone like you who admires Thai women, it is safe to know these things first before courting one to make sure that you do not seem ignorant and insensitive. As different as Thai culture can be to yours, respect everything they have and they will do so with yours, too.