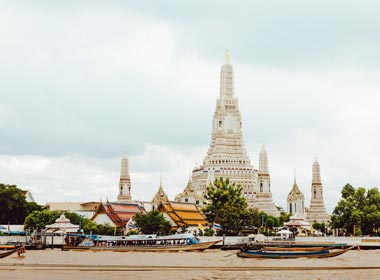 Bangkok is the Capital City of Thailand and is also the most populous city in the country.

With over 10 million residents and thousands of square kilometers in coverage, getting lost in the city is more common than you would think. It is important to make sure that you not only prepare a travel itinerary but to map out how you’re going to get to your planned destinations.

As with any well developed metropolis, Bangkok offers a comprehensive public transport system. In fact, Bangkok offers more transport options than New York does. From the modern rails to the more traditional modes of transportation such as express boats on rivers.

As Bangkok Thailand is a very congested city, traffic congestion is an added factor for you when planning the different public transportation methods you would want to take. Rush hour is essentially similar to rush hour schedules of major cities around the world, usually early in the morning and late in the afternoon when professionals make their way to work.

To ease congestion on the main roads, the local government has turned to public transportation in an attempt to solve the problem. 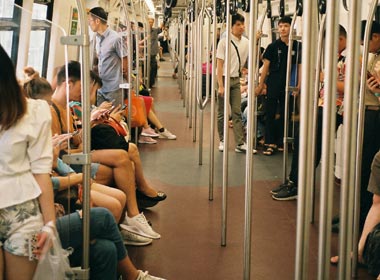 The Rail Systems of the City is one of the best ways to avoid the traffic on the main roads.

There are 2 rail systems that service Bangkok, mainly the Bangkok Mass Transit System (commonly known as the BTS, also known as the Skytrain), and the Metropolitan Rapid Transit (Bangkok’s subway system)

The Bangkok Mass Transit System is an elevated 2 rail system that runs through the newer parts of the city. This is a popular rail system for tourists as this connects the city to the tourist attractions, restaurants for some authentic Thai cuisines, shopping malls, and the Bangkok nightlife spots around the city. As the BTS stations are elevated, this allows it to soar over the traffic congestion of the main roads below. You can save money by availing of a Rabbit Card (common term for a Bangkok Public Transport Card), especially if you are planning to stay for an extended period of time.

The Metropolitan Rapid Transit System is similar to subway systems in the United States. There are two lines: the Blue Line and the Purple Line. The Blue Line runs between Tao Poon and Hua Lamphong, connecting with Bangkok’s main train station. The Purple Line runs from Tao Poon to Khlong Bang Phai in the neighboring province of Nonthaburi. Although mainly used by commuters, the Blue Line in particular can be great for visitors wishing to get to places like Lumpini Park, Khlong Toei, Queen Sirikit National Convention Centre, and the Thailand Cultural Centre. There’s an interchange station with the Airport Rail Link. 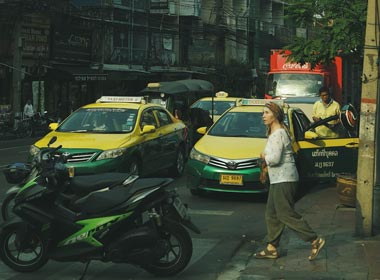 Taxi cabs offer the most convenience of all the public transport systems, albeit the most expensive as well.

Taxi cabs are also an option that you might want to consider. In Bangkok, Taxi Cabs are the most expensive option when it comes to public transportation. They run at fixed rates for a specific distance but also have a rate for time spent on the road. Meaning that when you take a cab while stuck in traffic, it’ll cost you.

A tip when hiring a taxi cab is to make sure that you have GPS on as other drivers might take a longer route to jack up the price of the running meter. Some drivers might take longer detours to avoid traffic congestion, so if you want to argue about routes, do be patient. 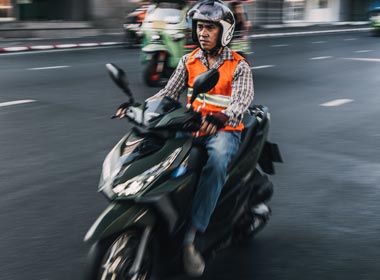 Motorbike Taxis are a unique and popular option when commuting around Bangkok. They have the added advantage of being slim and agile, allowing them to weave in and out of traffic much faster. This is an excellent option for solo travelers wanting to get to their destinations quickly.

The Motorcycle taxi service isn't regulated so you’re going to have to discuss a suitable price beforehand. It’s best to consult with a trusted local to ensure that you are being treated fairly when it comes to discussing a deal. Safety should also be a priority, so make sure you find a driver that provides a helmet for their passengers. 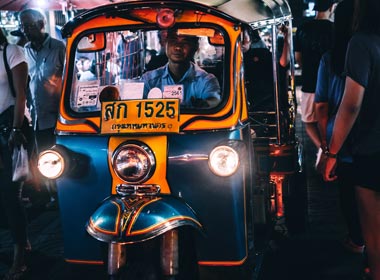 Tuk tuks are basically similar to rickshaws, but are motorized instead. They are a popular form of public transport and are an expression of Thai culture. Tuk tuks are popular in southeast Asia in general but this is more iconic in Thailand.

Tuk tuk, like motorbike taxis, are also not regulated when it comes to their rates, so you will have to discuss fair pricing beforehand. A fair tip, don’t hire a tuk tuk that’s waiting together with the other drivers, they’ll often refuse to lower their prices when they’re ganged up together. 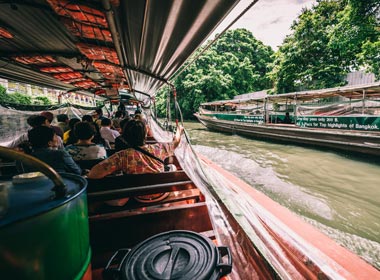 The Chao Phraya River is a river that goes through the city of Bangkok all the way to the Gulf of Thailand. 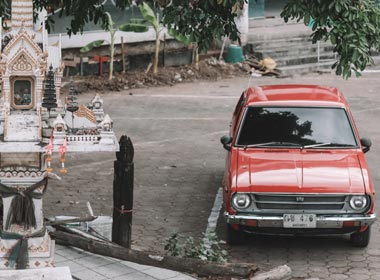 Renting a vehicle in Bangkok is one of the most convenient forms of transport in touring the city.

You can opt to rent a car for you to drive yourself around town. This is a very convenient option as you will essentially be in control of your time on the road. Prices for car rentals will be expensive as aside from the daily rates, there will also be insurance and other charges.

It is always important to avoid the traffic congestion on the main roads, so you have to find alternative routes if you want to make the most of your time in Bangkok.

Another tip is to always have spare change with you. The city, especially the metro rail system does offer cards that you can preload with credit, however all other transport options will require you to pay in cash. This includes taxi cabs and all other non-regulated rides around the city.

Although Bangkok, Thailand is considered to be a safe city, pickpockets are still everywhere. Make sure to stay vigilant and mind your personal belongings all the time as well.